Yes, I know I’m not the only one praying for rain. It is incredibly dry outside right now… our grass is brown and the hydrangeas are wilting. They certainly are in dire need of God’s refreshment.

I would also like for it to rain so that I won’t have to play 2 softball games in this sweltering heat. I’m way too old to be playing softball in the first place, but in near 100 degree weather?!?!? And with a heart problem?!?!? Am I insane?!?!?! Apparently so. I signed on for this, I need to finish. We have 2 games tonight and then 3 (yes 3!!!! back-to-back) next Tuesday and then we’re done (I hope). We’ve only won one game and it was a forfeit by the other team after too many of their players left during a rain storm. They were up 12 to 0, but we won by forfeit! We’ll take it any way we can get it. We’ve also been mercy ruled at least 3 times, it’s embarrassing!

Maybe tonight will be different… maybe.

I used to play in middle school and junior high and I’d like to think I was pretty good, but, you have to remember, that was eons ago. I’m much, much older and much, much slower these days.

I keep pulling up the weather radar for our area and trying to coax the green and red blotches a little further east. I can’t tell if it’s working. The first game starts at 6:30… there’s still time for it to change direction… right?

Anyway… the earth’s vegetation and I would really like some rain… and maybe some cooler temperatures… and maybe a little more sleep (I’m dozing as I type). Maybe a nap will improve my softball abilities. At this point, I’ll try anything!

“Have I not commanded you? Be strong and courageous.
Do not be terrified; do not be discouraged,
for the LORD your God will be with you wherever you go.”
Joshua 1:9 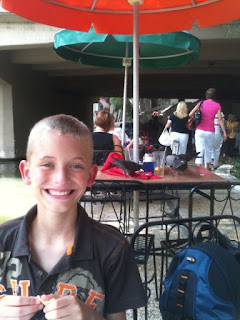 Here is a recent picture of Connor, 10, in San Antonio.
He’s growing up way too fast! 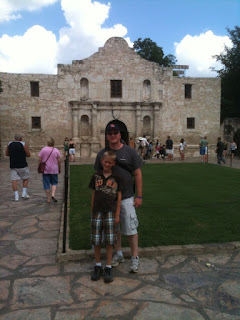 Rob and Connor posing in front of the Alamo. 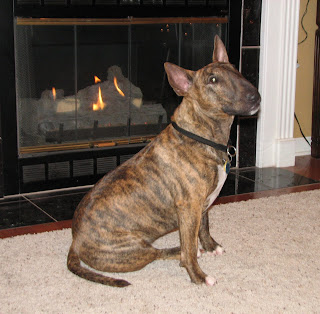 Here’s our 2 year old brindle bull terrier Macy. She’s such a sweetheart!!! We are extremely blessed with a fantastic family pet!
Heading off to bed now! Will post more later. Have a fantastic night!
Happy Blogging!

I can’t believe it’s been nearly 3 years (!!!!) since I published a post on here! A lot has happened in that time. Here’s the Readers Digest version:

Rob proposed in April 2008, he moved back to my hometown in December 2008 and started working for the same company as me, we got married in January 2009, adopted a brindle bull terrier, traveled to Jackson Hole, WY in October 2009, I sang my first solo at church in January 2010, we started a new Sunday School class for young single adults in February 2010, I completed my first half-marathon in March 2010, my good friend and I started a photographic arts business (http://www.diamonddaisydesigns.com/) around that same time, I completed my very first online college course in photography in March 2010, we just returned from a vacation in San Antonio and we’re preparing for a couple trips this month. WHEW!! I think that’s it… I’m sure I’m forgetting something.

I promise I’ll do better about blogging!

That’s it for now… I’m playing around with some backgrounds for this. I’ll post pictures from our adventures in a little while…