Okay… here is the update I promised from the other day… sorry, things have been pretty crazy around here!
I went back Monday afternoon for a follow up mammogram and ultra sound to look at the possible “artifact” and to see past the dense tissue.  The “artifact” was not a machine issue, but instead, the ultra sound showed it was a fibrous spot in my left breast.  And, the radiologist could only see so deep on the ultra sound because of the super dense tissue.  So… I was scheduled for a Breast MRI, which uses a powerful magnetic field, radio frequency pulses and a computer to produce detailed pictures of internal body structures.  My appointment was yesterday morning and let me tell you, it was an experience that I won’t soon forget and hope I don’t have to experience again anytime soon.
Below is a picture of the contraption they put me in: 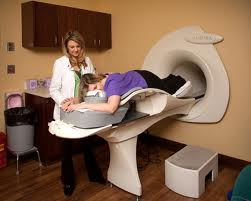 Let me start off by saying this, they offered me Valium and I should have taken it! I started out similar to the lady in the picture.  I had headphones on, listening to Air1 and a squeezy thing in my hand to call the nurse if I had any issues while in the machine.  I was told that I couldn’t move an inch or they’d have to stop the test completely and try again another day.  The tech then started the meds in my IV and slowly pushed me back into the tunnel.  Note: if you’re at all claustrophobic, you’ll want to take the Valium.

Small spaces don’t usually bother me, but this was a whole other level of “small”.  For those who don’t know, I had open heart surgery nearly 15 years ago to repair a defect on my aorta right above my heart.  In order to do this, the surgeon had to break my breast bone.  Since then, my sternum has been very sensitive to any kind of pressure.  Laying on my stomach in this machine put some major (& completely unexpected) pressure on my breastbone.  I started to panic because I couldn’t take a deep breath and I thought I was going to hyperventilate.  I immediately started squeezing the squeezy thing to get the nurse’s attention.  At this point, I’d only been in the machine for about 2 minutes!!  I told her what was going on, she removed the bulky headphones and replaced them with earplugs that did not play music.  She also allowed me to carefully turn my head to the side a little to help relieve some of the pressure I was feeling. I was able to calm down and the test continued. 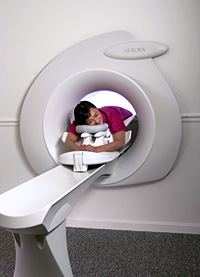 I certainly was NOT smiling like the woman above.  This was no grinning matter!  Now, without the music, I really noticed the strange sounds this machine makes.  The best way I can describe it is to imagine a roller coaster coming down the tallest part of the track at break-neck speed.  Another sound reminded me of sound effects from a horror movie!  The only way I was able to get through it was to pray.  I prayed about and for Connor, Rob, my family… everything.  Finally the tech comes in to check on me and to tell me that I only had 12 minutes left.  I was halfway through.  She started the next round of meds to provide the contrast needed for the final part of the test and round 2 began.  By now, my left hand is nearly completely numb.  I once again feel panic setting in.  The noise is really loud at the point, making my anxiety worse.  I start squeezing the thing again, but the nurse doesn’t come in immediately like she did at first.  I realize its because the machine is in the middle of a cycle and the nurse probably can’t come in until that is complete.  Apparently I was right, because just as soon as the noise stopped, I hear her open the door and try to calm me down by saying I only had 3 minutes left.  I can handle 3 minutes. After it was all said and done, I stopped at Starbucks for a Double Chocolatey Chip Frappuchino and headed in to work.  They told me they would send me the results in the mail in a few days.
Later that afternoon, the doctor called.  She said she wanted to call me personally because she was fearful the tech would get the information wrong.  Unfortunately, I was driving so I couldn’t write any of what she was saying down.  From what I understood, I have spots on both breasts that appear to be Hormonal Glandular tissue or something.  I can’t remember the third word.  She said that there was less than a 5% chance that it could be anything bad, but she wants me to return in 6 months for ANOTHER MRI!  I told her I wanted Valium this time!!
I had the procedure done at Mercy Women’s Center in OKC.  For more info… click HERE
That’s all… I’m going to bed… this has been a VERY stressful day!
Until next time…
Happy Blogging!