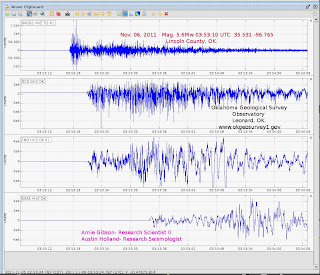 Last night I experienced a first here in OKC.  The largest earthquake in recorded history for the state.  A 5.6 on the Richter Scale.  The next largest was a magnitude 5.5 recorded back in 1952.
Here’s how it started… it was shortly before 10:30 pm.  We were winding down after a very eventful evening of college football.  The Razorbacks defeating the Gamecocks and first ranked LSU pulling it out in overtime against 2nd ranked Alabama.  Connor’s in bed.  Rob’s in bed.  Macy’s in bed.  I’m sitting on the bed reading my Bible.  All of a sudden, I started to hear a rumble in the distance that sounded like a train.  Since we don’t live near any train tracks, I asked Rob what it was.  He said he thought it might be an earthquake.  Then I noticed the lamp shade next to the bed start vibrating, then the bed… and then the entire house began shaking pretty violently.  It was so loud that Macy started barking.  I got up and headed to the bathroom door frame (because that’s what you’re supposed to do in an earthquake, right?), but could barely keep my balance because the flooring was doing this weird rolling motion.  Then, Connor came into our room freaking out, wondering what was going on.  A few seconds later the motion stopped and all was quiet.  Apparently, there had been another earthquake, this one a 4.7 struck early Saturday morning.  We didn’t feel that one, but we definitely felt the 5.6 one!  I did also, feel the 4.0 aftershock at 3:39 this morning.  But, it only shook the bed for a few seconds and didn’t wake anyone up.  There have been other aftershocks throughout the morning, but I haven’t noticed them.
Here’s a look at the epicenter in proximity to where we live… 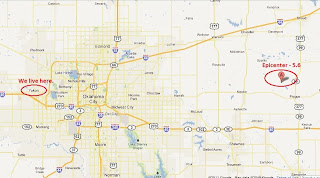 It was about 55 miles from us.  There are reports that folks in Arkansas, Texas and even Nebraska felt this thing.  It was CRAZY!!  Fortunately, as far as I can tell, we don’t have any damage.  There is a small crack in the concrete floor of our garage, but it might have been there before last night.  The iron piece hanging on the wall over our bed as rattled out of position and one picture in the living room was crooked following the quake, but I didn’t notice anything else.
One local media news station says there are some damaged roads, highways, homes, buildings and infrastructure reported in Lincoln County, where the epicenter was and only one minor injury.  A man hit his head while trying to get out of his house.  The media also says that highways like US-62 were crumbled in pieces and one major road was blocked by a
boulder that had rolled into the road.
Here’s some information from the United States Geological Survey regarding last night’s event:
Until next time…
Happy Blogging!