“Once you have helped raise a teenager, you know why alligators eat their young.”
– Erma Bombeck
(1927-1996)
American author
This was our company’s Quote of the Day this morning.
I firmly believe it counts for pre-teens, too.
Especially for my 11 year old!
He is soooooo dramatic and appearances are EVERYTHING to him!
I took Connor this past weekend to get his hair cut.  It was a fine experience for me, but a near devastating, life-threatening one for him.  Connor thinks he has a big forehead and that his ears stick out and the only way to mask that is for his hair to be long.  I’ve let him grow it for the last couple months, since we moved to Oklahoma, and it has gotten pretty long.  It didn’t look terrible, but I knew that we’d be going to my parents for Thanksgiving and my mother is very particular about Connor’s hair, so it was time to visit the barber.  She thinks it should be short and well-kept.  If we didn’t get it cut before our trip, my mother would have never let me live it down.
She thinks his hair should look preppy… he thinks his hair should look cool… I just want his hair to be clean!!
That’s not too much to ask, right?
I wish I’d taken a before picture.  It was definitely too long in the back, but the front and sides weren’t that bad.  He almost had the old Justin Beiber look going on.  Similar to this: 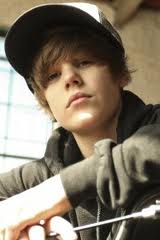 After Saturday morning at a barber shop near downtown Yukon, Connor came out looking like this, but with a frown on his face: 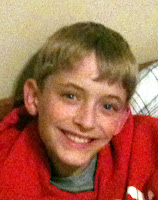 (Sorry for the grainy picture, my iPhone has been doing that since the latest update.)
Once outside the shop, I told him I thought his hair looked really nice (aside from the cowlick); however, he immediately put his hat on (backwards of course) and said he hated it because it made his ears stick out.  Little does he know, it’s not his hair that makes his ears stick out… its genetics!!
It will grow back, dear child, I promise!
Until next time…
Happy Blogging!