I know I’ve said it here before, but I love Christmas and everything it represents.
“For unto us a child is born, unto us a son is given. And the government shall be upon His shoulder; and His name shall be called Wonderful, Counselor, The mighty God, The everlasting Father, The Prince of Peace.  Of the increase of His government and peace there shall be no end…”
Isaiah 9:6-7a

It’s also the small things in life that I seem to appreciate more this time of year.  I’ve said THIS before as well… if you know me, you know my obsession with chocolate… especially these…

Cadbury Mini Eggs are my major weakness.  I’ve been known to eat a whole bag in one sitting.  Without sharing with anyone… not even my blue-eyed child who would look at me longingly and beg for just one egg.  Nope, they’re ALL mine.  Get your own bag! 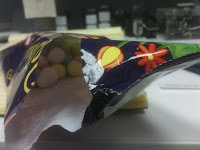 Until now, they’ve only been available for the Easter holiday, beginning the night of Valentine’s Day.  I know this, because I’m at Wal-Mart the night of February 14th looking for them!  Thank goodness they were only available from that day through Easter Sunday, because I needed the entire rest of the year to recover and work feverishly to shed the many, many pounds I gained during that short amount of time.
Until now. 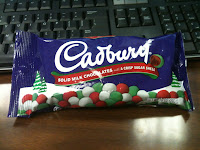 Introducing… Cadbury Mini Balls (that’s not what they’re really called, I just think its funny!)(Apparently, after searching on the internet, they really don’t have a name.)
My fantastic friend Jennifer, who is also my co-worker/office mate, stumbled on them a few weeks ago when she was in Wal-Mart.  I had no idea they even existed.

I was so excited to try these, but nervous at the same time.  I’m such a huge fan of Mini Eggs that I was worried that the Mini Balls would somehow not meet my expectations and I would be extremely disappointed.

Turns out… I had worried needlessly.  Although slightly different, they taste pretty much the same.  The colors are obviously changed for the season.  Instead of pastel blues and pinks for Easter, they’re red, green and white.  And, they’re round, of course, instead of the egg shape below.

I’ve been very good with the Mini Balls.  I’ve only had a few bags and I try to only consume them on the weekends.  They’ll go away after Christmas (unless I stock up) and I’ll have about a month and a half before I’ll see them again in their traditional Mini Egg form.  Why couldn’t Cadbury come up with a Halloween version instead so there would be more downtime between the two holidays?

Yummy!!!!
Come on Searcy house… I really, really need you to sell so I can start up a gym membership again!!!  I’m really, really going to need it after all this candy!
Until next time…
Happy Blogging!