Yep… that’s me…
Unbeknownst to me (and Rob for that matter), I married a Jew and my last name would have been Katzenstein if Rob’s great-great grandfather had not changed it back in the mid 1800s.
(Actually, Rob’s only 1/16th Jewish.)
Rob’s father has been doing some family genealogy research and, with the help of his cousins, recently discovered that Rob’s great, great grandfather Jacob Fell was actually named Jacob Katzenstein.
I did a Google search on the name Jacob Katzenstein Fell and came up with some very interesting information and more family members.
Here is Jacob Katzenstein Fell, Rob’s Great Great Grandfather…

He was born in 1821, probably in Flieden, Germany.  He was married to Henrietta Jette Stern, which happened to be his cousin.  Jacob and his 2 brothers, Louis and Samuel, immigrated to America in 1859 and settled in Uniontown, Pennsylvania.  That’s possibly when all 3 Katzenstein brothers changed their last name to Fell. Jacob and Henrietta had 3 children: Belle, Soloman and Joseph.  There was also a half-brother named Curnel Fell, who is Rob’s great grandfather.
Through Ancestry.com and MyHeritage.com, I came across a wonderful woman named Gail who just so happens to be Belle’s great granddaughter.  She was actually on the hunt for any information about Belle’s half-brother Curnel Fell.  Gail had known her great grandmother, but had never heard her talk about a half-brother.  She didn’t even know he existed until he was mentioned in Joseph Fell’s (Belle’s full brother) obituary (copy below; taken from MyHeritage.com). 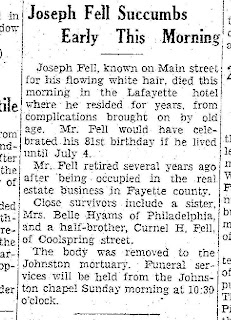 We knew about Curnel, but no family BEFORE him… Gail knew about Curnel, but no family AFTER him.
Gail and I have been in constant contact and have had so much fun with this discovery.  We’ve pretty much confirmed that we are related and she has expanded her Family Tree on MyHeritage.com to include all the Fell’s from Curnel to present day, which includes 5 sons, 4 grandsons, 10 great grandchildren and 3 great great grandchildren.
We still, however, don’t know who Curnel’s mother is… that’s a mystery that may never be solved.  And, we don’t know why Jacob and his brothers changed their last name and why they chose “Fell”.
More research must be done!  The internet is an amazing thing!
Until next time…
Happy Blogging!