Daysoftheyear.com says “Hedgehog Day highlights these loveable creatures but heed this word of warning, don’t get too close. As we all know hedgehogs are covered in spines but what you may not have known is that these spines are actually hollow hairs stiffened by keratin. Hedgehogs use their spines as a defense mechanism when under threat by rolling into a tight ball so all the spikes point outwards.”

“Hedgehogs rely heavily on their sense of smell; they can smell food under an inch of soil and can often sense the presence of danger. They tend to search for food at night and can travel a distance of 2-3 kms. One very strange fact about hedgehogs is that they self-anoint which seems to be connected with irregular smells or tastes making them create large quantities of frothy saliva which they flick over their spines with their tongue.”  Interesting.
HedgehogCentral.com says “Long before the advent of Groundhog Day on February 2nd, the Romans observed a similar event thousands of years ago on the exact same day.  Rather than use the North American groundhog, the Romans used the hedgehog.”
The only difference between the two holidays (other than the choice of animal), “is the fact that the Romans would look to see if the hedgehog saw its shadow under a clear moon at night.”
Since there are no indigenous species of hedgehogs in North America, our ancestors adopted the use of a groundhog to predict the change of the seasons.  I personally think this…

Is WAY cuter than this… 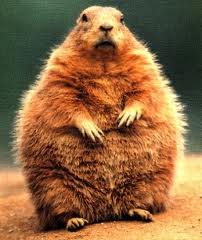 There have been a number of famous hedgehogs in popular culture, the most famous probably being Sonic the Hedgehog, he’s certainly the fastest.

Mrs. Tiggywinkle, from the Beatrix Potter books, is another well-known hedgehog and happens to be extremely good at laundry. 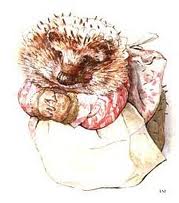