Not all heart disease is caused by poor diet, lack of exercise or smoking… I was born with a congenital defect.  I Go Red to help improve lives for those born with “special” hearts. 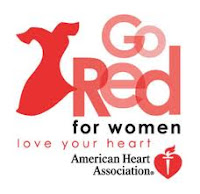 Last year, I was chosen to represent the company I work for in the 2011 Gallery of Survivors for the Arkansas Chapter of the American Heart Association.  My quote above appeared in the Arkansas Go Red for Women Luncheon’s program.
Here is the rest of my story…
My sister and I were both born with a congenital heart defect called Supra Valvular Aortic Stenosis, which is a narrowing above the aortic valve that causes the heart to not function properly.  Growing up, our activities had to be monitored to make sure we did not “over do” it. I was asymptomatic until my junior year in college when, at the age of 20, I started experiencing chest pains.  My doctor informed me the pains were nothing to be concerned about, but he did notice that the murmur that was caused by the supra valvular aortic stenosis was becoming significantly louder.  Following a stress test and follow up catherization on Halloween 1996, it was determined that I had an abnormally high amount of pressure inside my heart and an enlarged heart. I underwent surgery to relieve the pressure at Arkansas Children’s Hospital in Little Rock on December 18th, 1996, which also happened to be my 21st birthday.  The operation was performed with success and 4 months later, my sister had the exact same procedure.
Even though I tire easily I have always attempted to lead an active lifestyle. I have finished the Little Rock Half-Marathon twice and begun training for OKC Memorial Marathon in April.  My husband Rob, my son Connor, our dog Macy and I also enjoy weekend hikes across our beautiful state. 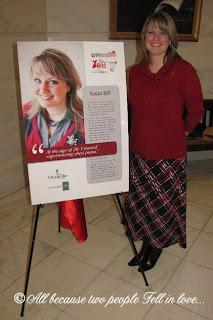 Today is Wear Red Day.  It falls on the first Friday in February each year and is a day when many people wear red to show their support for the awareness of heart disease.
Designed to warn women of their #1 health threat, The Heart Truth created and introduced the Red Dress as the national symbol for women and heart disease awareness in 2002 to deliver an urgent wakeup call to American women.  The Heart Truth is a national awareness campaign for women about heart disease sponsored by the National Heart, Lung, and Blood Institute, part of the National Institutes of Health, U.S. Department of Health and Human Services.

Each spring, local American Heart Associations put together an event just for women called the “Go Red for Women Luncheon”.  I’ve had the pleasure of attending the last 3 years in Arkansas and hope to go this year in Oklahoma City.  The event typically includes a delicious, heart healthy meal, a keynote speaker, entertainment and a silent auction to raise money for the campaign.
For more information on the American Heart Associations Go Red for Women Campaign, click HERE.
Let’s all wear red today… I will be!!
Until next time…
Happy Blogging!