Ok, so not only are there “Tall Girl Problems” on Pinterest…
there’s “Curly Hair Problems”!!
I’m sorry for those that follow me on Pinterest… I’ve pinned quite a few of these tonight.
The one below is so far my favorite!
Source: pin4fun2923.blogspot.com via Susan on Pinterest
Story of my life!
Until next time…
Happy Blogging!

Ok… so I’m OBSESSED with Pinterest.  I can’t help it, please forgive me.
I started a new board the other day called “Makes Me Giggle…”
I found a pin just now that I had to share… this is how I’m viewing my day on this Monday!
Enjoy!
Source: Uploaded by user via Susan on Pinterest
Until next time…
Happy Blogging! 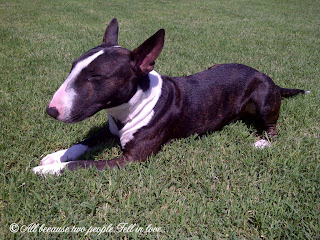 Meet Rossi!
He is a 2 ½ year old full blooded bull terrier and is ALL puppy (still)!  He’s a little thing, just a smidge too tall to be classified as a mini.  He’s actually a rescue.
I subscribe to alerts from an area Bull Terrier Rescue organization.  He popped up in my email one Thursday night about 4 weeks ago during a NBA Finals game between the OKC Thunder and the Miami Heat.  Rob and I fell in love with him immediately and decided to bring him home. 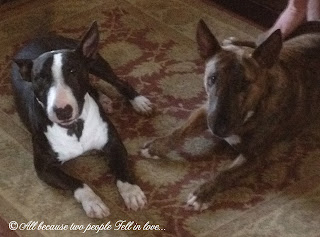 We traveled to Tulsa that Saturday with Macy to see how the two canines would act towards each other.  They were immediate friends, so we brought him home with the intention of just fostering him for the summer instead of actually adopting him.  But, seeing as we haven’t heard from his owner in about 2 weeks, I bet its safe to say that we have, in fact, adopted him. 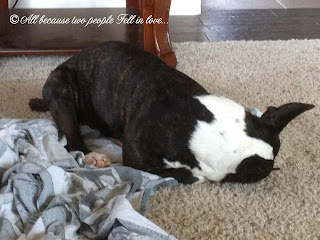 He is technically Connor’s dog.  Connor has never really been fond of Macy.  She’s very shy and timid and quite scared of him.  He has always said that he wanted a dog that would play with him.  Rossi will definitely play with him!
Connor is away visiting his dad for the summer, so he hasn’t even met Rossi, yet.  He’s only seen pictures and videos, but he already loves him and continuously begs Rob not to “bond” with him!  Rossi currently sleeps in a crate in Connor’s room, anxiously awaiting his return in a couple weeks.
Rossi is pretty quirky.  He has this thing with water, especially when it comes out of a hose or a mister.  Below is a video I took at our neighbor’s house one Sunday night.
He barked and cried like a seal until the water was turned off!  We also discovered that particular night that Rossi is absolutely terrified of fireworks!  Which was not a good thing since 4th of July was recently…
We never thought we’d be a “two-dog family”, but we couldn’t pass up this sweet pup in need of rescue! 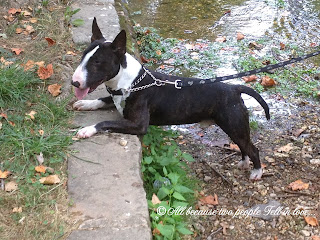 …take me out to the park!
Take me to Chickasaw Bricktown Ballpark to be exact!
Last night Rob and I ventured downtown to OKC’s Bricktown Entertainment District for a baseball game between the Oklahoma City RedHawks and the New Orleans Zephyrs. 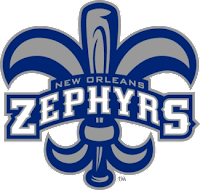 What’s a Zephyr, you may ask?  According to Dictionary.com, a “zephyr” is a gentle, mild breeze.  I found that extremely hilarious for some reason! 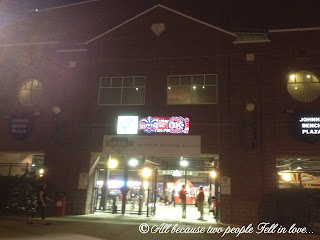 It was super hot, even at 7:00.  Sunglasses were definitely a priority! We enjoyed hotdogs, chips and drinks and even scored this super cool souvenir ball cap! 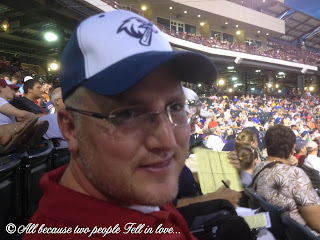 Isn’t he cute?
The RedHawks are a minor league, Triple-A affiliate of the Houston Astros.  The team was originally known as the Oklahoma City 89ers from 1962 – 1997 when the team played in a stadium at the state fairgrounds.  The scouts were numerous at last night’s game.  The one sitting next to us was with the Washington Nationals.  Here is one that was sitting in front of us with his speed radar measuring the pitcher’s fast balls. 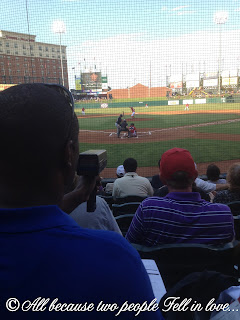 Here are some random pictures from our night of baseball! 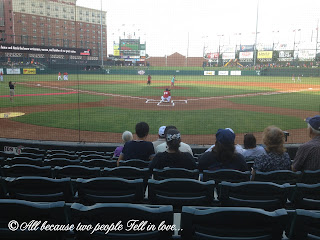 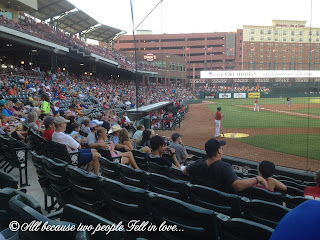 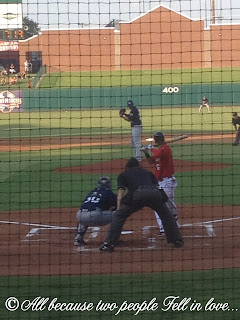 Last night’s game was a nail-biter with the RedHawks losing to the Zephyrs 10 to 8.
Until next time…
Happy Blogging!
Rob, the 2 dogs (yes, there are 2 now.  I’ll introduce our new addition in a future post) and myself traveled to St. Louis to visit Rob’s family for the weekend.  During the 10 hour journey, we were listening to a country station on satellite radio.  I’m not a big country fan… I usually listen to Christian music, so this was Rob’s choice.  A catchy song came on with an amazing female lead singer.  She had a clear, strong voice that neither of us had ever heard before.  The display on the radio said “Edens Edge”, so I immediately pulled out my phone to see what I could find out about them.
You’ll never guess what I learned…
They’re from ARKANSAS… around the Russellville area to be exact and they were on a promotional tour that would be stopping at the outlet mall not 15 minutes from our house in just a few days!
I dragged Rob to the concert last night… and we had the best time! 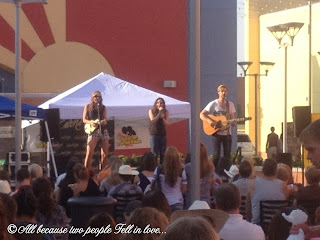 The group is made up of lead singer Hannah Blaylock (middle) from Nimrod, Arkansas.  Cherrill Green (left) plays the mandolin, banjo and guitar and sings harmonies.  She is from right outside Magazine, Arkansas.  Finally, Dean Berner (right), from Russellville, Arkansas sings harmonies and plays guitar and dobro.
Between songs, they were chatting it up with the audience, like performers do on stage, and Hannah asked if anyone in the crowd was from Arkansas.  I started hootin’ and hollern’ in my Razorback t-shirt, stopping short of calling the Hogs.  I sooooo wanted to though! 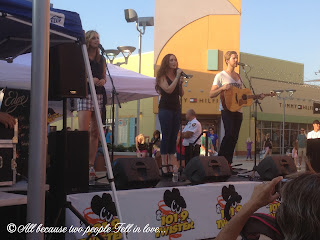 It was totally acoustic, the only instruments were a guitar and a mandolin.  Following the short, 45 minute show, the trio signed autographs and took pictures. 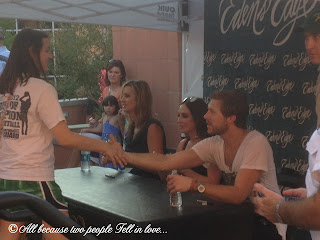 We didn’t hang around for that… we’re too cool… just kidding!
You really should check them out… their debut album just came on yesterday.  I purchased it this morning ($6.99 on iTunes) and I love every song on it!  Especially “Swingin’ Door” and “Amen”. 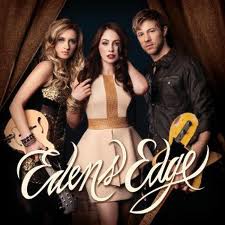 Here’s a Grand Ole Opry performance of “Amen”.
Here’s a link to their site: www.edensedge.com  The band also has a facebook page (of course, who doesn’t these days).
Looks like the next stop on their current tour is Dallas tonight at the Superpages.com Center and Houston tomorrow night at the Woodlands Pavilion.  If you’re in the area, you should really go see them!
Tonight, we’re headed to our first ever Red Hawks baseball game down in Bricktown!  Should be loads of fun!
Have a great Friday!
Until next time…
Happy Blogging!