“Your righteousness is like the highest mountains, your justice like the great deep.
You, LORD, preserve both people and animals.”
Psalm 36:6 (NIV) 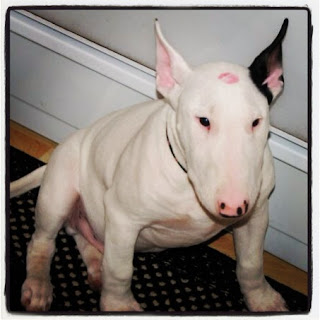 This 4 and a half year old bull terrier named Jackson is slowly making a full recovery after surviving underground in an 8 foot deep hole, with no food or fresh water, for more than 11 days.
The 65 pound dog disappeared Friday morning, March 8th, around 10:00am while on a walk with his owner, Bob Fell of Saint Charles, Missouri. Bob and his wife, Ruth and their oldest daughter Beth were visiting their youngest daughter, Becky Yoder and her family on the Yoder’s farm just south of Novelty, Missouri when the incident occurred. It was assumed that Jackson had simply run off through a snowy field and gotten lost. After searching for over 6 hours, Bob, Ruth and Beth reluctantly began the trip home to Saint Charles without their canine companion.
Ruth said leaving Jackson behind was devastating. “We began earnestly praying for his safe, LIVE return. We asked precious friends to also pray. We offered a reward and put up posters with his picture on them. We got on the Home Again website, Craigslist and paid $85 to Fido Finder…in short did all we knew to do to alert people that we were missing a beloved pet. No word came…a week went by with every drop of rain…Jackson hates being out in the rain…and flake of snow a reminder that our dear little dog “might” be outside suffering but we had no idea where… It was the “worst of times”.” 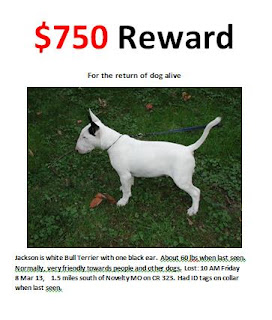 On Tuesday evening, March 19th around 6:45 the Fell’s son-in-law, Jordan Yoder took advantage of the recent time change and longer daylight hours by taking a short walk with his oldest daughter, two and a half year old Maren and their red colored Australian Cattle dog named Sydney. The “short” walk turned longer at Maren’s insistence. Maren kept saying “NO Papa” and pointing down the road so Jordan kept going which enabled Sydney more time to explore.
Soon, Sydney became very interested in an old concrete housing unit once used for a water well, less than three quarters of a mile from their home. Sydney refused to come to Jordan when he called for her repeatedly. Jordan decided to walk across a muddy field for about 100 yards, carrying Maren in his arms, just to find out what Sydney was interested in. He said the top of the old housing unit was covered with old wooden boards camouflaged with grass, leaves, snow and corn stalks to the point no one could tell a hole was even there. 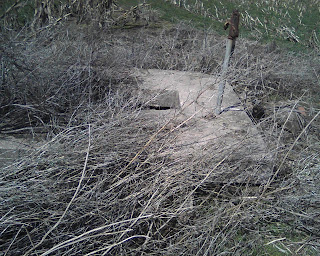 When Jordan looked down into the hole, he could see Jackson sitting at the bottom looking up at him, too weak to bark and covered in dirt and filth. He immediately called his brother, Joshlin Yoder to bring a ladder and Jackson was rescued. Jordan said he had assumed the top of the housing unit was completely covered with concrete and did not even think of looking there after Jackson’s disappearance. 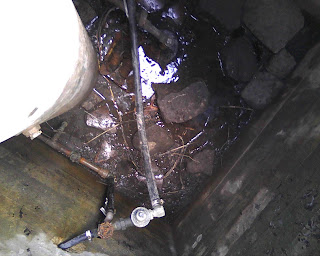 The picture above is the bottom of the well, where Jackson spent nearly 12 days.
Jackson, who had never spent a night outside in the elements before this experience, is now back home with his owners in Saint Charles sleeping each night on the family’s living room recliner with his blanket. The Fells report Jackson was severely dehydrated with a couple broken teeth and several deep scratches. They say he lost almost 20 pounds, sustained a urinary tract infection and suffered from poor liver and kidney function following his nearly 12 days underground in isolation with no food or clean water. The Fells contribute Jackson’s survival to the prayers of numerous family members and friends and the grace of God. Ruth says “The probabilities in this story without Divine help are incredible. If Becky hadn’t asked Jordan to take Sydney for a walk, if Jordan had not taken that walk and if Maren hadn’t insisted that they go farther, if Sydney had come when Jordan called and if we hadn’t had the time change so Jackson could be seen… if the melted snow and rain water every few days during this time period did not trickle down the hole giving Jackson something to drink… the likelihood for this happy ending could have been compromised at any point.”
Until next time…
Happy Blogging!