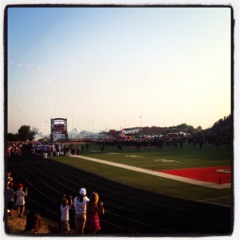 248/365
Tonight is the huge high school rivalry in our area between the Mustang Broncos and the Yukon Millers.  It’s even got a name… “Canadian County Conflict”!  The Hubs and I went early to join a group from our church that was handing out free water at one of the stadium gates.  It was our first game since we moved here.  I must say I’m impressed.  We ran out of water way before the crowds were all inside.  Once finished with our task, we headed inside for the kick-off.  The Bronco Stadium is unreal!  It’s HUGE!  There is a jumbo screen at one end of the field where a very professional player video was playing and then fireworks started going off while both teams were running onto the field.  We’re told around 15,000 people attend this game. Unbelievable!!  All the students were decked out in appropriate (and some borderline appropriate) fan gear, from face paint, to costumes, to crazy body art. We are definitely not in Searcy anymore!  We watched the kick-off then headed out.  It was super hot and I’m more of a cold weather football kind of girl. Bring on the stadium blankets, heavy coats, scarves and gloves!  I’m ready!
In the meantime… I’ll root on my Razorbacks against Samford tomorrow!  Woo Pig Sooie!
Oh, and go Broncos!
Until next time…
Happy Blogging!