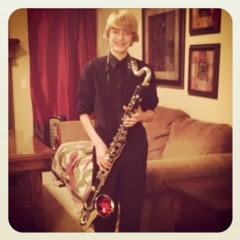 349/365
Connor had his 8th grade band Christmas Concert tonight. He wouldn’t let me take his picture at the school, so this is afterwards. Mr. Hog wanted to get in on the action!  The band sounded so good tonight… I’m really impressed!  I think this may be the last year for Connor and band. He’s saying he doesn’t want to play in high school. I bet it has to do with that whole marching thing. (I quit band the year before marching, too…polyester uniforms and summer/fall heat just don’t mix.) We’ll have to discuss it. He’s so talented and I think he should continue, but ultimately, it’s up to him.
Until next time…
Happy blogging!