Last fall, at the end of grilling “season”, we tossed our several year old, rusty old BBQ grill. It was cheap and the build-up on the racks was starting to flake off on our food…YUCK!  We’re a grilling family, so when we put it in the trash we were kind of lost.  We’d been so used to grilling once a week!  We were going to purchase one at that time, but since it wasn’t grilling “season”, not a lot of stores had their grills out and the ones they did have were definitely not on sale, if you know what I mean…

So, we were anxious for springtime to arrive so we could go out and purchase a brand new BBQ grill! We decided to actually invest in a fancy one that would last a lot longer than the cheap ones we’ve purchased in the past. The main thing with us is…we don’t like to cook on gas or propane grills. We feel that foods cooked over charcoal have more flavor…so that’s what we were looking for! 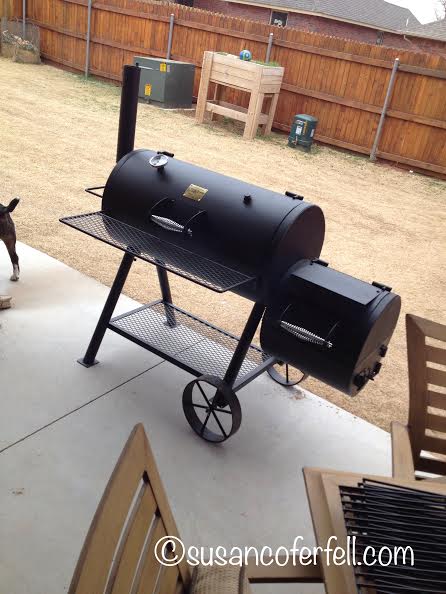 It’s an Oklahoma Joe…which we thought was very appropriate since we live in Oklahoma and the purchase would benefit our local economy, however…if you look on an Oklahoma Joe box, you’ll find that the grill is actually made in China… go figure.

It was pretty easy to put together. Rob took his time and still had it together within an hour or two… I’m not really sure… I was watching Real Housewives or something while he was in the garage working on it. What can I say… I would have just been in the way if I had tried to help 🙂

We tested it out tonight with these… 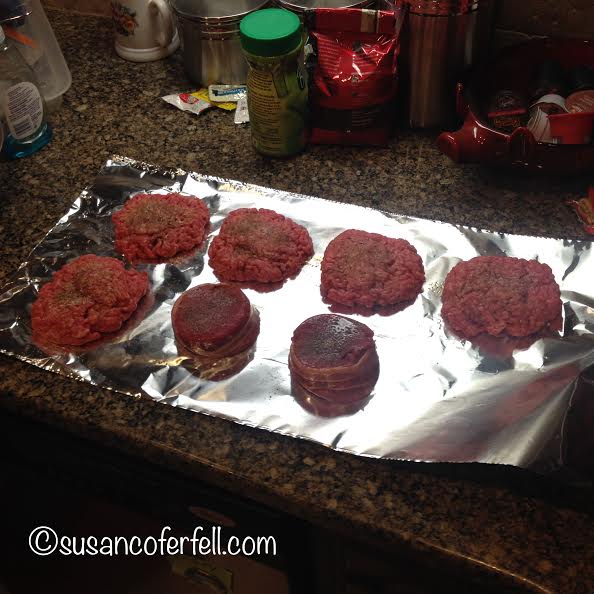 …even raw, the meat looks delicious! I was in charge of the potatoes. I made them differently this time… 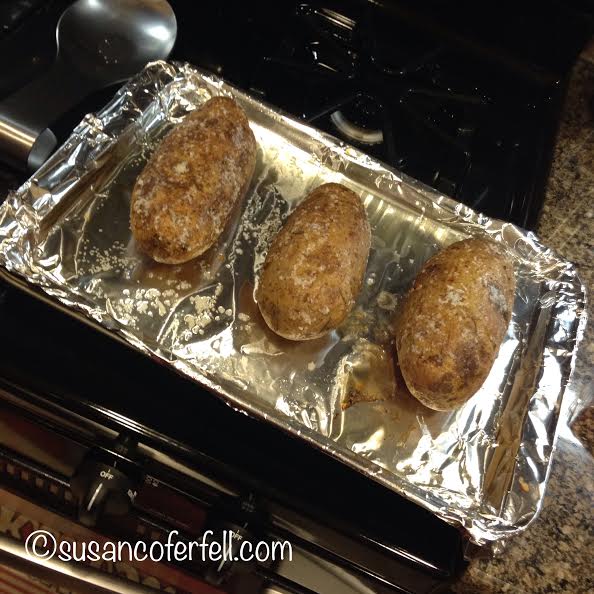 Here’s how I did it… first, cover the pan in tin foil. Wash, dry and poke holes in the spuds with a fork. Line them up on the baking sheet, then coat each potato with olive oil and a little Kosher Sea Salt and bake at 400 degrees for an hour. They turned out unbelievable! 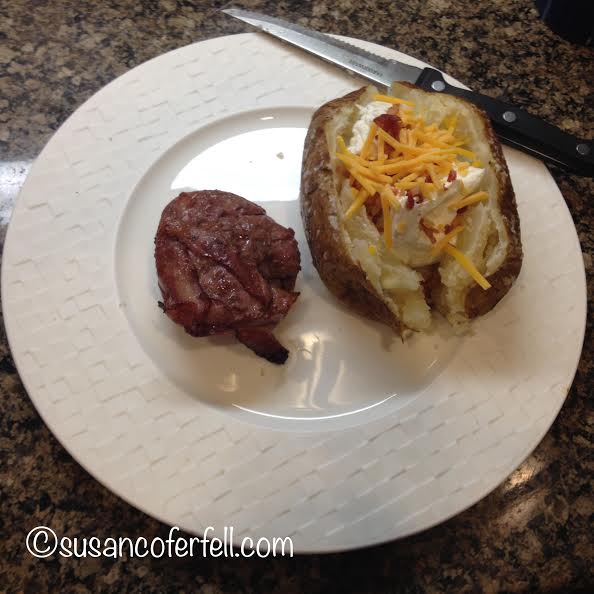 …I know there is a lack of green, but I just wasn’t hungry for broccoli or other vegetable tonight for some reason. Rob had some spinach, but I wasn’t in the mood.

We love filet mignons from Wal-Mart… can you believe you can get a package of two for less than $10?! I like them just as much, if not better, than a $15 or $20 piece of meat from a fancy restaurant! Seriously, you should try them!

This grill is fancy, wasn’t cheap and is probably too big for our family of three, but I’m impressed with it and can’t wait to spend many more evenings out on the back patio with the Hubs cooking up some delicious food!

By the way… our new sectional arrived this week! I’ll post pictures soon!

The “Egg Wars” have begun at our church.  What is an egg war you may ask…well, it’s where all the Sunday School/Small Group Classes get together and stuff eggs for our annual Easter Egg Hung at Easter.

Last year our church stuffed a total of 28,000 eggs!  Rob’s and my small group stuffed the most eggs and won the “war”.

The winning class gets to come up with a “Fear Factor” sort of task for their group Pastor.  I can’t remember what we had ours do last year… 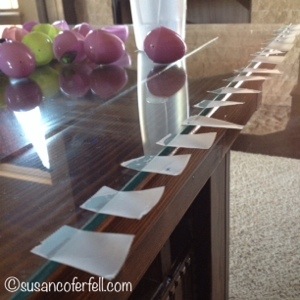 Rob and I had a system this year getting the eggs stuffed and taped.  We ended up bringing over 200 eggs to church tonight.  It would have been 220, but we bought some cheapo eggs and some of them cracked!  Plus, we miscalculated our candy and came up some short.  The process went a whole lot faster with these…

I love these and am totally obsessed with them.  Apparently they love me back… check out that heart shaped egg I found in my bag!

The kiddo and I traveled to my hometown over the holiday weekend to visit my folks. We had a great visit, but it was much too short.  We made time to see one of my best friends/former hairapist and her family in their brand new house!  She made us these…. 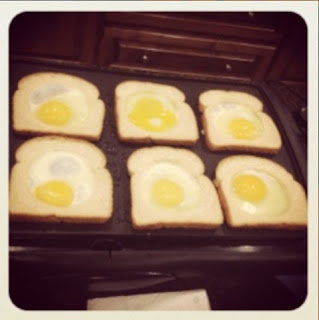 “Eggs in a Basket”…with eggs fresh from her parent’s farm.  So delicious!!!  We had breakfast for dinner that night, one of my favorite meals!
Side note… I learned something new during my time at their house… did you know that it’s virtually impossible to hard boil an egg unless it’s at least 10 days old??  Me, either!  Crazy!
Mom and I did set aside some time to do a little baking while we were there.  We decided to take on this little endeavor! 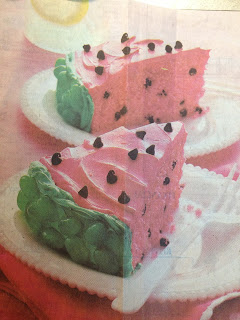 (Source: Arkansas Democrat Gazette)
Ours didn’t turn out quite as nice as the one in the picture above, but it was super close (although slightly lopsided).
Here’s the recipe!
Watermelon Cake
(from Arkansas Democrat Gazette)
Ingredients:
½ cup PLUS 2 teaspoons miniature semisweet chocolate chips
1 (15 ¼-ounce) package super moist white cake mix, divided use PLUS ingredients called for on package
1 (3-ounce) package unsweetened cherry or strawberry gelatin
1 (12-ounce) container whipped fluffy white frosting, divided use
Green and red food coloring
Green jelly beans, if desired
Directions:
Heat oven to 350 degrees.  Coat 2 (9-inch) round cake pans with cooking spray.  In a small bowl, toss ½ cup chocolate chips with 1 tablespoon of the cake mix.
In a large bowl, beat remaining cake mix with the water, oil and egg (as listed on the package) and the gelatin with electric mixer on low 30 seconds, then on medium 2 minutes.  Stir in the ½ cup chocolate chips.  Divide and pour into pans.  Bake and cool as directed on the package.
In small bowl, stir 1 ¼ cups frosting with 10 to 12 drops green food coloring.  Stir 10 to 12 drops red food coloring into remaining frosting.  Frost sides of cake with green frosting; frost top with red frosting; press remaining chocolate chips into the red frosting for seeds.  Press jelly beans into sides, if desired.  To serve, cut into wedges.  Store loosely covered.
Makes 16 servings.
And… here’s our version! 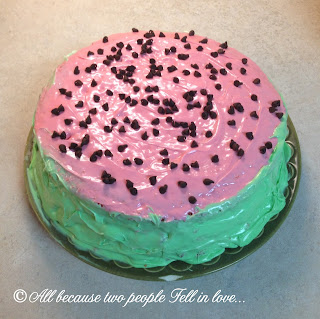 Here’s what we did differently:
We used yellow cake mix, because that’s what my mother had on hand.
The recipe doesn’t call for it, but we iced between the two round cakes with the red icing.
Also, we didn’t use the green jelly beans around the edge. 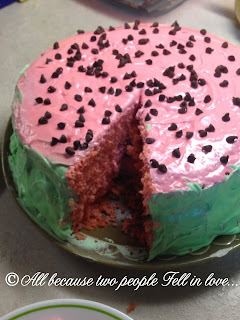 Here’s what we’ll do differently NEXT time:
We could possibly use watermelon flavored gelatin to keep with the watermelon theme or just use red food coloring in the cake mix with no gelatin (my personal choice since I’m not super fond of fruit flavored gelatin in general).
Instead of making two round cakes, make a bunt cake… could be cute and easier to handle.
Let me know how yours turns out!
Until next time…
Happy Blogging!

If you know me, you know I love toads… they may not be the most beautiful animals in the world, but I think they’re super cute!
Here is a picture of my all-time favorite that used to live on our back patio back in Arkansas. 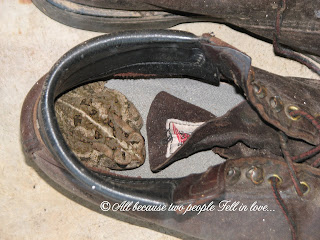 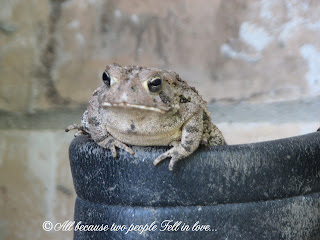 Mr. Toad was perfectly content in Rob’s work boot!  Isn’t he just the cutest??
Shortly after we put our new bench on the front porch, I noticed a little toad behind one of the legs, so I decided to put a house out for him in our flower bed.
I looked online for some ideas… including these nifty ones I found on Amazon… 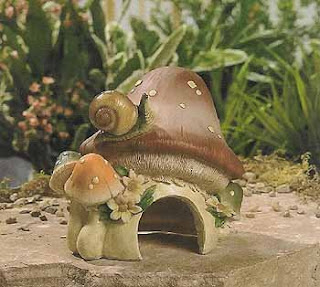 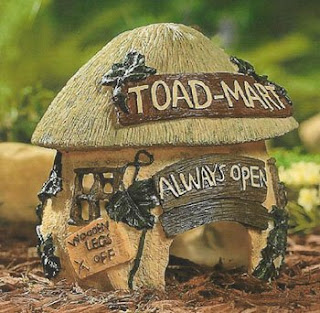 I may eventually go this route; but for now, an old clay flower pot will do just fine! 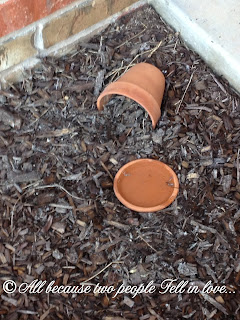 I put the pot’s tray out to the side and filled it with water. 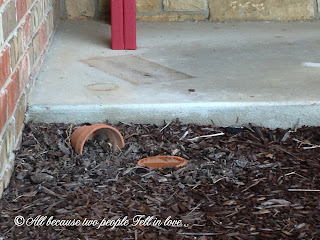 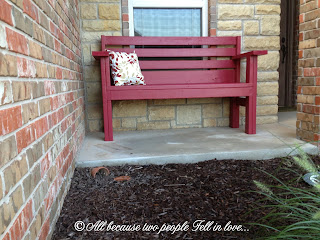 I haven’t seen him, yet, today but I’m hopeful!
Until next time…
Happy Blogging!