Sounds like the intro to a joke right?  Nope, not in Arkansas.  You just never know what you’ll find in a small Arkansas town.
I would like to introduce you to Trouble… 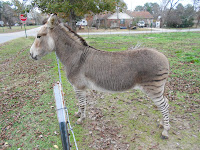 Yes, Trouble is a donkey/zebra hybrid and he lives in a fenced in lot in the middle of a neighborhood in the White County town of Kensett.  Apparently, he’s been around here for years, but I’d never heard about him until the other day.  His owners are used to people stopping and snapping pictures of him, but be sure to bring an apple or carrot.  He wasn’t too happy that we didn’t.  He kept trying to eat my shirt.  Otherwise, he’s very friendly. 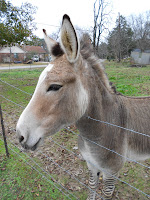 Wikipedia refers to the cross as a Zebroid or a Zeedonk, but I prefer Zonkey.  They have been bred since the 19thcentury.  Even Charles Darwin noted several zebra hybrids in his studies.  The site says “Zebroids (or Zonkeys) physically resemble their nonzebra parent, but are striped like a zebra.  The stripes generally do not cover the whole body, and might be confined to the legs or spread onto parts of the body or neck.”  Such is true for Trouble. Wikipedia continues by saying that “in zebra-donkey hybrids, there is usually a dorsal (back) stripe and a ventral (belly) stripe.”  Trouble has that, too. 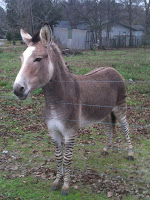 Rob calls him the best looking Democrat he’s ever seen! LOL!
After doing some other research on the internet, I came across a story that a Little Rock TV station did several years ago regarding the conversation piece.  Trouble was originally purchased from a couple in Mayflower, Arkansas who had a male zebra and two female donkeys and were breeding the exotic hybrid as a hobby.  He was bought to guard goats on a family farm, but was found to be too rough with the smaller animals.  He was then bought by another local couple and has been in his current home since, attracting visitors from all over.
Trouble can be found on the corner of Searcy and Fourth Streets in Kensett, Arkansas.   Don’t forget your camera and an apple!